The following was transcribed from a recently-discovered religious text, a previously-unknown work believed to have been written by one of the Apostolic Fathers. The language has been translated from its original early Latin, though pieces of the message have been lost due to wear on the small remaining amount of parchment as well as the archaic language.

"I have learned the greatest truth...seen things unseen. The light...upon me, and revealed to me the purpose for my existence. I have made it my mission...and all will know the truth as I now know it to be. There shall be no corner unreached...exempt, for I am but a vessel through which His light shall make itself known. This shall be the start of..."

The following was transcribed from a document dated roughly two centuries later, also written in Latin. While no proof as yet exists, there is believed to be a connection between the two. This note, as the previous, was translated from Latin, and is missing parts of its message due to age.

"Negotiations with the emperor have failed. He is a pompous and stubborn man, blind to...that I have delivered upon him. However, it matters not. There will be more emissaries to follow, and the persecution of my brethren will end. Rome...its day of wrath and fire by His hand before that fool converts. We shall...and he shall be stricken with the cattle."

The following has been dated year 1095 A.D. This note follows the previous by some 700 years, and is also translated from Latin. It is possible that there are related notes in the intermediary, as of yet undiscovered. This one is theorized to be referencing the First Crusade.

"The time has come to reclaim the holy lands from...filthy...of the sand. These heretics of their new faith...be brought to justice in the reclamation proceedings. Through blood and pennance, we shall cleanse the land...its ignorance. Upon my insistences, the empire has...its blessing to this campaign. Our holy crusade begins on..."

The following has been dated year 1185 A.D. Once again, it has been translated from Latin. As in the previous note, the author's signature remains legible, and can be confirmed to be the same as the one appended to the prior note.

"The church, in its wisdom, has...in my campaign to purge the blasphemous from their domain in the west. This is no doubt a result...success of the reclamation campaign. Our strike shall be...and carry the banner of His divine guidance. They will know the light of truth if I must burn...to the ground. I ask for the blessing of the papacy, as well...our Holy Father, in the days of tribulation to come. This great purge shall go down in history as...and all shall recognize the authority of the church and our Christ. The march on...Cathars begins soon."

The following has been dated year 1352 A.D. This note, in contrast with those before it, has been translated from the French language, but retains the same signature as those preceding it. Unlike past notes, this one is surprisingly intact, and can be assumed to be an account of the infamous Black Plague.

"A new leprosy is upon us. Countless lives have been lost to this rot, as nations collapse and peoples unite... Am I perhaps the only man so sure of its origin? This is an age of reckoning, a purge not unlike the great flood of Noah before, as our father in Heaven smites the unfaithful and the blasphemous from this long-forsaken world. Other, less hardened members of the church have taken to aiding the infected, and without doubt, they too have been stricken down by the divine hand of retribution for so attempting to deny the Lord his grand design. Myself, as well as those wise enough to let the wicked perish, have thus far survived His ordeal, and signs of its cessation are imminent. We've not long to wait now before he welcomes us to Paradise with open arms... but there is still much to be done on this earthen plane before that day arrives. More souls of the wicked yet to be purged, more eager young minds to be molded. I take this solemn duty upon myself, and in recognition of this sign from above, adopt a new identity as a man of the clergy. This will be the last transcription by the man formerly known as Claudius."

The following note has been dated 1463 A.D. Though not signed as previous notes have been, the handwriting has been confirmed to match all five prior in this collection.

"A momentous occasion, for better or for worse. I have taken, not entirely of my own accord, to the adoption of a son. My heir to the world, I shall raise the boy as only I can, teaching him the goods of this world, and more importantly, the evils. It has been a great trial for a man of my age to care for an infant with little assistance, even from my fellow clergymen, but if it be the will of the divine, it is one which I shall endure and overcome. My expectations of the child are not high, but our lord works in mysterious ways. Perhaps he will be of use to me."

The following note has been dated 1482 A.D., a scant 20 years after the previous. Also unsigned, and translated from the French language, as the last two.

"I have emerged from a harrowing ordeal this day, after a betrayal unlike has been seen since the time of Samson and Delilah. I see now that it was foolish of me to relinquish my great power and influence in the church for the sake of one ungrateful child. It is fortunate indeed that our father above still has need of my services. My flesh reconstituted and my blood reborn, I rise, virtuous and proud, to continue my unwavering efforts in the name of the church of Christ. I shall redouble my efforts. The wicked shall fall and the virtuous be spared from my campaign of righteous fury. I shall His sword and soldier be, so long as this body of mine retains breath."

The following note has been dated 1545 A.D., though despite sharing the same handwriting and style of previous entries, is once again translated from Latin rather than the vernacular French. It remains unsigned.

"The devil has raised his wicked head in the form of a man named Luther, daring to challenge the divine doctrines of the papacy. In response to the growing threat his teachings present, a holy council has been formed under the orders of our Father, and upon my own insistence. This marks an historic day in our faith, as we once again purge the unfaithful as history forces us to repeat. The Lutheran movement grows in number with each passing day, but addressing it with frank force shall undoubtedly quell these infidelities once and for all time. All now rests on the will of the council. It falls upon me to harden them, and convince them on His behalf that the time for our next and final crusade is nigh."

The following note has been dated 1813 A.D. Unlike previous notes, this one is written in the English language. The gap between this note and the last, much longer than those between the several notes prior, is thought to be a result of the historical progression of diplomacy over war.

"'Tis an age of despair that befalls us. Men have blinded themselves to the merits of persecution and order, as more of the blasphemous remain uninhibited in practicing their heresies. What little hope that remains for a world truly free of sin lies in two words: manifest destiny. Such a pretty little phrase. The rebels of Europe have taken root in a new world, but among them remain the scant few, proud and virtuous, who slay this world of its evils and remain vigilant in their pursuit of justice and purity. To think there existed a land wherein such unenlightened savages remained, unredeemed in the eyes of God. Only through cleansing the Earth of these red demons shall my faith in our future be restored."

This tenth and final note was discovered only recently, written once more in French on a piece of ordinary journal paper. The discovery of this note is what launched our investigation on the original author and brought us to tracking down the many startlingly similar notes displayed above. This is the only note in the latter half of the collection to mention the writer's name.

"Hope is lost. There is no longer any saving this wicked and ill-fated world. As a new form of witchcraft under the guise of 'technology' lends itself to the masses, and men lie with other men, I am reminded each day of my failure to purge this world of its vice and its sin, however much I may long to do so. I am perhaps the last of the Lord's righteous emissaries, knowledgeable of His true wishes but unable to act upon them. It is a lonely life, living as the one man of truth in a world full of falsehood. At times I find myself thinking that I am in some ways cursed, forced to walk a world that is forever beyond my salvation, unable to end my own life or the lives of others. Perhaps it is best that I simply disappear into the ebb of time, and allow the world to rot. Perhaps one day I will be able to rise from the ashes of civilization, the last and only man on a finally pure world. But alas, my hope in such a lofty possibility grows dimmer with the passing of each day. Perhaps... it is for the best. This note may be the last that this sorry, forsaken world ever hears of Claude Frollo."

(Data collection and transcription conducted by the University of Notre Dame, Paris) 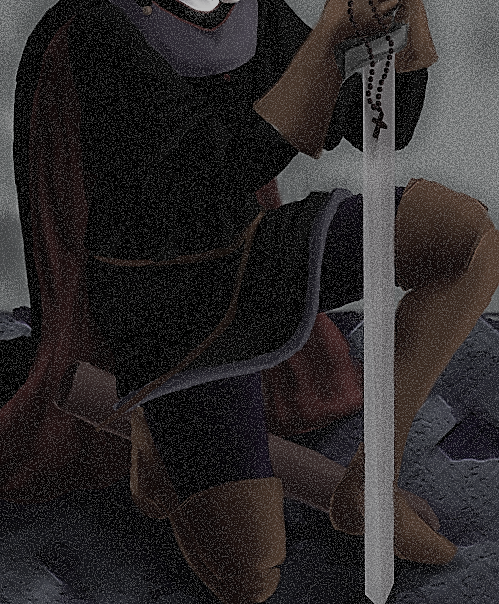 Written by Xelrog T. Apocalypse
Content is available under {{#NewWindowLink:http://creativecommons.org/licenses/by-sa/4.0%7CCC-BY-SA}}

Retrieved from "https://freepasta.fandom.com/wiki/Eternal_Father?oldid=4264"
Community content is available under CC-BY-SA unless otherwise noted.