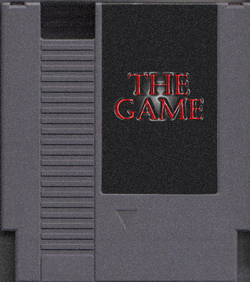 The following is a series of posts made in a thread created by user Daniel Schultz on a small classic gaming forum over a period of several days. Comments have been revised for the sake of readability.

Hey guys, Dan here. I've got a question for all of you... actually, I'm looking to find out more about a game I've come across. Google didn't do me any good, so I thought I'd ask if maybe any of you other enthusiasts have heard of it before. I'm thinking it's probably a bootleg, and since I know how much you guys love talking about pirated games, I figured I'd come here.

The game is an old NES cartridge with the title "The Game" printed on the front in big, bold letters. There's nothing behind the title—just a little glow and a plain black background. Nothing on the back of the cartridge, either... and no Nintendo seal of approval, which means it's almost definitely a bootleg. The title's probably supposed to be ironic, or some kind of parody, or something. Any help or leads are appreciated.

Can you be more specific? Got any other details besides the box art?

I haven't been able to get the thing working at all since I got it, no matter how many times I try. I think it's defective. I'll try it again tomorrow just to be sure, though.

I popped it into my NES this morning, and after a few tries (no more than any NES cartridge, mind you) I got the thing working. I expected a title screen to show up, the same as on the cover art—but the modders must have been really lazy, because it jumped straight into the game. No demo, no opening dialogue, nothing. The view was top-down, and I was playing as a girl with long, blonde hair. By all rights, it looked like it would be an RPG game, like the old Pokémon or Final Fantasy games, but I don't think there was any kind of leveling or stat system, or any kind of character customization. In fact, there were a lot of standard game features that weren't included in this game. Like pausing. I tried all the buttons, but there was no way to freeze, pause, open a menu, nothing. There wasn't even any background music. Just a girl in a room laying in her bed.

When I pressed the A button, though, a text box flashed on the screen, then the girl turned and sat up, and I was able to control her. I think the text box appeared automatically, but I hit the button so fast after it appeared that I didn't get the chance to read it. I could walk around just like any other top-down game, examine objects in the room, perform various commands, et cetera. Actually, it was pretty impressive how many commands there were for such an old game. The stuff in the room was pretty modern, too—a flat screen TV, laptop computer... I think it was supposed to take place in a semi-futuristic world, at least for the time it was made. I noticed my character was pretty sluggish as I walked around the room. Eventually I got downstairs and tried playing with some actions to get her to drink a cup of coffee. She actually pepped up a little after that. But that's not the surprising part—it actually wasn't instant. It took a minute or so before I noticed that her movement speed had stopped being quite so sluggish. The makers of this game had really gotten intricate with the finer details, even if it meant the game lacked some basic features.

Hopefully this is enough for you guys to go on. I did play the game a little bit past this point, messing around with other objects in the house and even going outside for a bit, but I still can't tell exactly what kind of game it is. It's definitely not an RPG. Some kind of adventure game, maybe? Or, my best guess is that it might be some kind of "alternate life" game like Animal Crossing or The Sims. Let me know if this sounds familiar to any of you guys, I'm really curious to find out where this thing came from.

Pics or it didn't happen.

I've never heard of a game like that. Sounds like some kind of internet indie game. Weird to think that people were already making things like The Sims before it ever existed, isn't it?

I don't recognize it, either. Sounds like a pretty generic mod, at least going by the case description. Just solid black with the title, huh? I'll do some digging and see what I can find, but I can't make any promises.

None of you guys have heard of it, huh? I found it sitting on my bed when I got home the other day, so I figure my mom left it as a gift or something. She doesn't know much about classic games, so she's always giving me bootlegs she bought online or something without realizing it.

I'll give the topic another day or two to see if anyone who does recognize this one turns up. Anyway, a funny thing happened today—I went to the local coffee shop on my way to work and I saw a girl who I swear looked just like the little in-game sprite working the counter. She was practically falling asleep at her post, yawning the whole time she tried to take my order. When she apologized and told me she'd had a really strange morning, I couldn't help but giggle a little, remembering all the stupid things I'd done with the character in the game. I didn't tell her about it, of course, but drawing the connection between the two made for a pretty funny coincidence.

Who knows? Maybe you were controlling her. You do voodoo, do you, Dan? Lol.

Guys, I don't know where this game came from, but I think it's a brand new mod. Someone out there is actually modding NES cartridges in this day and age... and a creepy motherfucker, at that.

I couldn't get the game working on the NES the other day after I got home from work. I tried it again yesterday morning and it booted up fine, though. It's possible that it has an internal clock. Once again, no menu, straight to the girl in bed. But this time? I pressed the buttons more slowly. Pressing the B button got the text box to appear, and this time, I was able to read it before skipping past. The text box said, "Jennifer! It's time to get up!" Seems innocent, right? That's what I thought, until I remembered something. The girl in the coffee shop was wearing a nametag. It said "Jennifer."

I'm seriously freaked out, guys. I haven't touched the game since I made that connection. It took me a day just to post this. Where the hell do you think it came from?

That is disturbing. But let's not overreact. It's a common name. Probably just a coincidence—like the rough morning story.

It's a pretty amazing coincidence, though. Maybe the mod was made by her boyfriend or something, huh? You know, as a gift. 'Course, it would make for a pretty weird gift. A video game about yourself...

That could be. It's never been easier to find out how to modify games, what with the prevalence of ROM hacks and all these days. Maybe she's actually the one who made it. Maybe she's got a crush on you or something and just has a... very weird way of showing it.

Oh, bug off, arachnerd. Get a sense of humor.

I didn't go to my usual coffee shop yesterday because... I was kind of worried I might lose my nerve or something if I saw that girl again. Even if it's all just a coincidence, it's a really eerie one, okay? I mean, yeah, it's possible that she or someone who knows her made it or something, but still.

I got the game working again this morning, and once again, it went straight to the girl lying in bed. I pressed B, and the same text window that the game always starts with popped up. "Jennifer! It's time to get up!" Just like usual, the little animation played where the girl sits up in bed and then I'm able to control her. It does help me to feel a little less shaken up, knowing that the game always starts the same way. That it's just a program. This time I went straight for the coffee so I'd be able to move around at the higher speed. It took about the same amount of time to kick in as last time (again, really impressed with the detail in the programming) and I was able to loosen up and start actually playing the game a little. I wandered around her little house, checking out all the objects and trying different commands out. I'll admit, I got curious, and... it turns out you can even undress her little sprite. Definitely not an official Nintendo product. After screwing around inside the house for a while, I decided to go outside—and just to see what would happen, I kept her naked. Hey, you can get away with it in Saints Row, right? I went outside and walked around in the street until a really fast car suddenly appeared on-screen and hit my character, knocking her out with a little 8-bit "thud" and leaving a little puddle of pixely blood. After that, I couldn't move her. There was no Game Over screen, no continue option, no anything. I think it was one of those games you had to reset each time you died. At that point, I had to get ready for work, though, so I just shut the game off. I'll see if I can get it working again later today.

Did you guys hear?! This shit was on the news! Dan, where the hell are you?

There was a traffic accident. A girl was killed, hit by a driver who said she just walked out into the middle of the street... naked. They said on the news her name was Jennifer Cummins.

You're not serious, are you? You guys are playing some kind of joke on me, right?

EDIT: Oh my god, you're right. I didn't get the news on TV over here in the UK, but I looked it up online and... Dan, where are you? Are you reading this?

He's not coming back. No way he would after something like this.

This thread has been closed and is no longer available for discussion.

The following thread was posted less than a week later.

Posted by TheRealRealDan on July 1, 2014

I destroyed the cartridge as soon as I found out about what happened. You know... just in case. But...

This morning, I woke up an hour later than I usually do, when I heard a voice ringing in my head: "Dan! It's time to get up!"

This thread has been closed and is no longer available for discussion.

Written by Xelrog T. Apocalypse
Content is available under {{#NewWindowLink:http://creativecommons.org/licenses/by-sa/4.0%7CCC-BY-SA}}

These reimagined screenshots were very generously created by user Urkelbot666.

Add a photo to this gallery
Retrieved from "https://freepasta.fandom.com/wiki/Playing_the_Game?oldid=4490"
Community content is available under CC-BY-SA unless otherwise noted.